Nearly a year ago I wrote about something I called «sensible naming» with respect to GPUs. It was at the time of the Radeon HD 3800 series launch where AMD unveiled a much cleaner, simpler way of naming its cards. Gone were the suffixes (for the most part) and instead what we were left with was this:

A family name, Radeon HD, followed by a four digit number. With the exception of the X2s, AMD has stuck to its naming system without fault. In fact, AMD has done such a good job with keeping the names clean that things are the way they should be: the internal codenames are more difficult to remember than the actual names of the cards (e.g. RV770 vs. Radeon HD 4870).

NVIDIA however, just hasn’t gotten the hint. The GT200 launch gave us two simply named cards: the GeForce GTX 280 and GTX 260, but it didn’t take long for NVIDIA to confuse the marketplace with the launch of the GeForce 9800 GTX+. I hoped that the naming silliness was limited to the older GeForce 9 GPUs, but today it extended into the GTX lineup.

The GeForce GTX 260 Core 216’s name is actually quite descriptive, albeit absurdly long. The GeForce GTX 260 part we already know from the GT200 launch, the Core 216 suffix just indicates that the GPU has 216 «cores» (also playing on Intel’s new Core i7 naming for Nehalem, due out later this year). Why NVIDIA didn’t just call it a GeForce GTX 265 or 270 is beyond me. 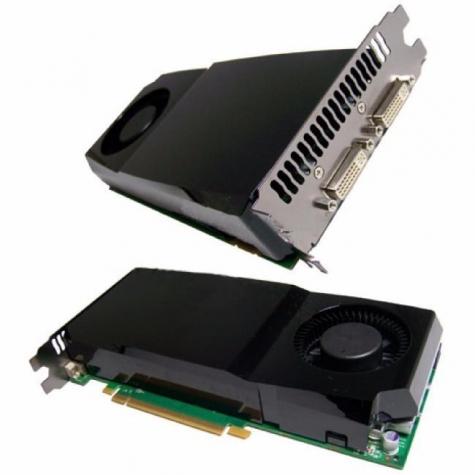 To make matters worse, we’ll see companies adding their own suffixes to the already extended name. For example, EVGA sent us their Core 216 called the EVGA GeForce GTX 260 Core 216 Superclocked Edition. Perhaps it’s some conspiracy to increase the salary of writers who get paid by the word.

If you remember the diagram below from our GT200 review you’ll see that a GeForce GTX 280 has ten clusters of 24 stream processors (the little blue blocks), for a total of 240 SPs or «cores». 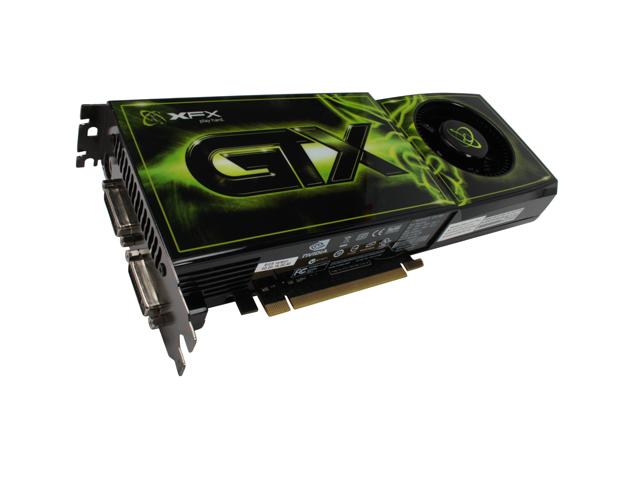 The GeForce GTX 260 has eight of those clusters (called Texture/Processor Clusters or TPCs), bringing its total up to 192 SPs. The Core 216, as you can guess, has nine clusters or 216 SPs. NVIDIA just enabled another TPC on the Core 216 (or alternatively, disabled a TPC on a GTX 280).

The extra TPC also gives the Core 216 another 8 texture address and filtering units, but the rest of the chip’s makeup remains the same, even down to the clock speeds. The Core 216 runs its core, shader and memory clocks at the same frequencies as the vanilla GTX 260.

Priced at $279, the Core 216 is a direct competitor to AMD’s Radeon HD 4870 — selling at a similar price. The GTX 260 will continue to exist although selling at a cheaper price point and naturally with more processing power, the GTX 280 remains unaffected. 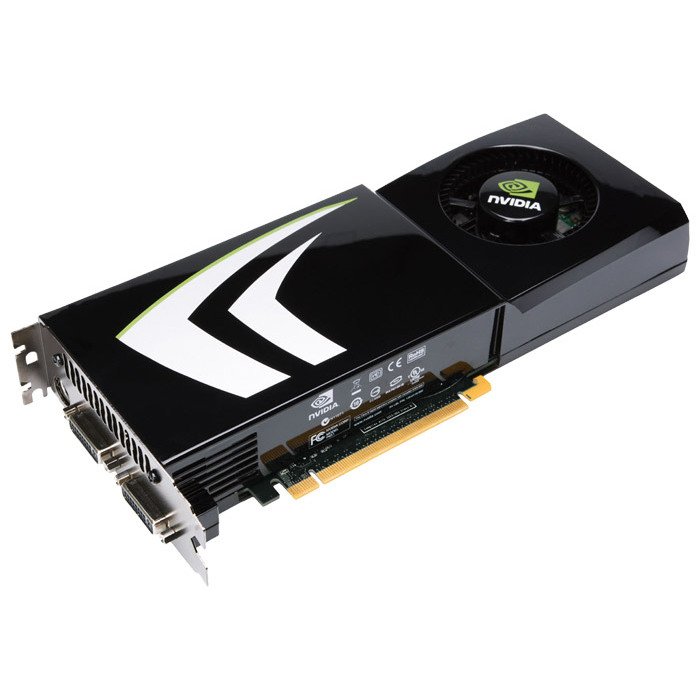 In the conclusion of our coverage of the Radeon HD 4850 and 4870 launch, we made this statement, «…dare we say a $300 graphics card represents an excellent value, from a price point perspective? These cards are definitely going to put significant price pressure on NVIDIA’s GTX 200 series.» At the time, the GeForce GTX 280 and GTX 260 were selling for upwards of $650 and $400 respectively, and ATI’s newly released Radeon, which performed somewhat better than the GTX 260, was introduced at «only» $299.

Of course, NVIDIA quickly responded with a hefty round of price cuts that brought the GTX 280’s price down considerably and put the GTX 260 and Radeon HD 4870 on roughly equal footing, but it turns out NVIDIA wasn’t quite done. 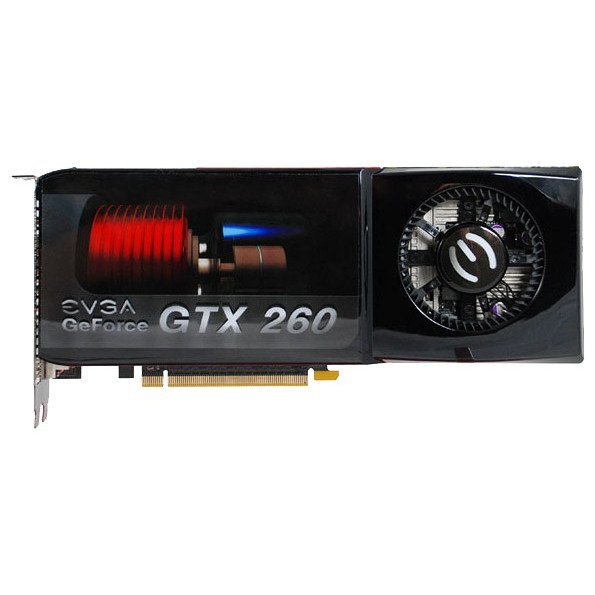 We’ve got a couple of the new GeForce GTX 260 Core 216 cards in-house from EVGA and Zotac, and plan to show you what they’re made of on the pages ahead. For now, let’s check out the specs and get some of the particulars out of the way. 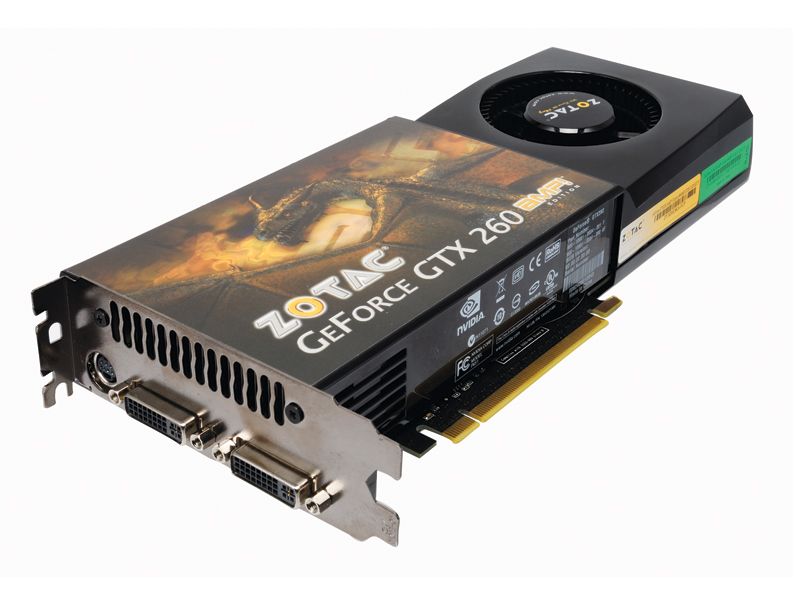 As you can see, not much has changed, at least with respect to the reference specifications.  NVIDIA’s reference specs for the two cards are virtually identical, with the only real differences coming in the form of an increased number of stream processors (up from 192 to 216) and texture filtering units (up from 64 to 72).  NVIDIA achieved this feat, not by designing a totally new GPU, but by enabling one more functional block in the GeForce GTX 260 Core 216’s existing GT200 GPU.  The GT200 has a total of 10 banks of 24 stream processing units, for a maximum of 240 steam processors (as implemented in the GTX 280).  In the first-gen GTX 260, 8 of these banks were enabled, for a total of 192 stream processors.  But in the new GeForce GTX 260 Core 216, nine banks are enabled for a total of 216 stream processors.  And along with the additional bank of stream processors, eight more texture filering units come along with it.

We should note that although the new Core 216 card doesn’t have the same GPU configuration, NVIDIA has informed us that the new cards can still be linked with first-gen GeForce GTX 260 cards and operate in SLI mode. 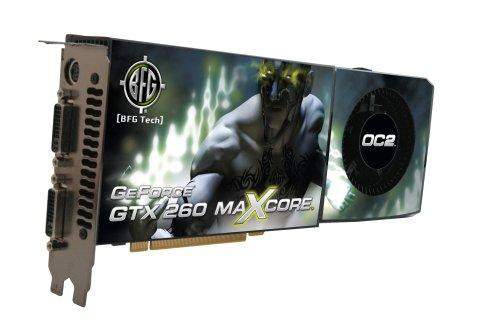 That is probably one of the main reasons for amending the GTX 260 name with the Core 216 moniker instead of giving the card a totally new name, like GeForce GTX 270, for example.

As for the GeForce GTX 260 Core 216’s other features and capabilities, they remain essentially unchanged from the original GeForce GTX 260.  For a more complete breakdown of the GT200 GPU at the heart of the GTX 200 series cards, we suggest reading our coverage of the launch from back in June.  In that article, we go more in-depth on the GPU, talk much more about PhsyX and CUDA, and breakdown the architecture in greater detail. 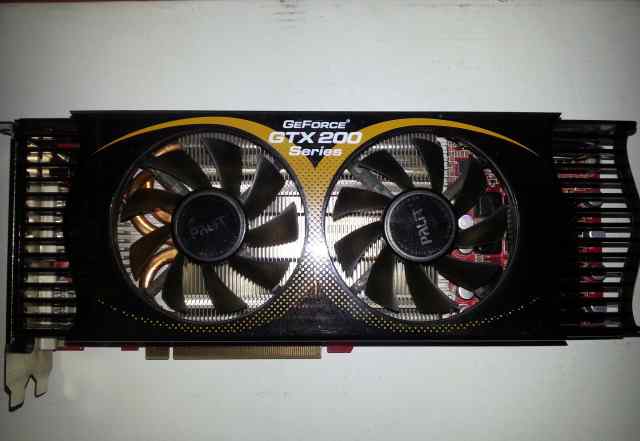 This is a desktop video card based on the Tesla 2.0 architecture and 65 nm manufacturing process, primarily aimed at gamers. It has 896 MB of GDDR3 memory at 2 GHz, and coupled with a 448-bit interface, this creates a bandwidth of 111.9 Gb / s.

In terms of compatibility, this is a two-slot PCIe 2.0 x16 card. The length of the reference version is 267 mm. The connection requires two 6-pin additional power cables, and the power consumption is 182 watts.

Information about the type (desktop or laptop) and architecture of GeForce GTX 260 Core 216, as well as when sales started and cost at that time. 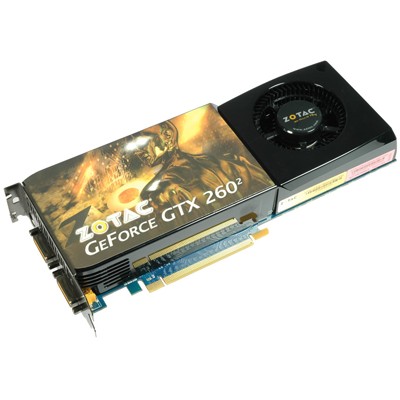 They indirectly speak of GeForce GTX 260 Core 216’s performance, but for precise assessment you have to consider its benchmark and gaming test results.

Types and number of video connectors present on GeForce GTX 260 Core 216. As a rule, this section is relevant only for desktop reference video cards, since for laptop ones the availability of certain video outputs depends on the laptop model.

We believe that the nearest equivalent to GeForce GTX 260 Core 216 from AMD is Radeon HD 6550A.

Here we recommend several video cards that are more or less similar in performance to the reviewed one. 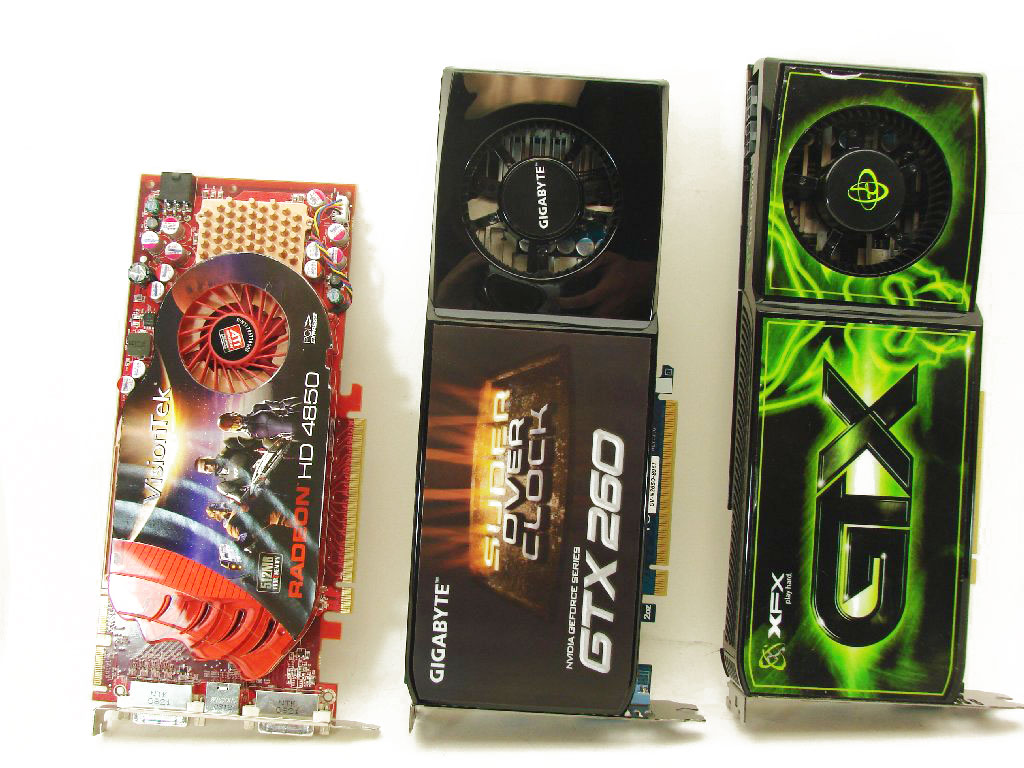 According to our statistics, these processors are most often used with the GeForce GTX 260 Core 216. 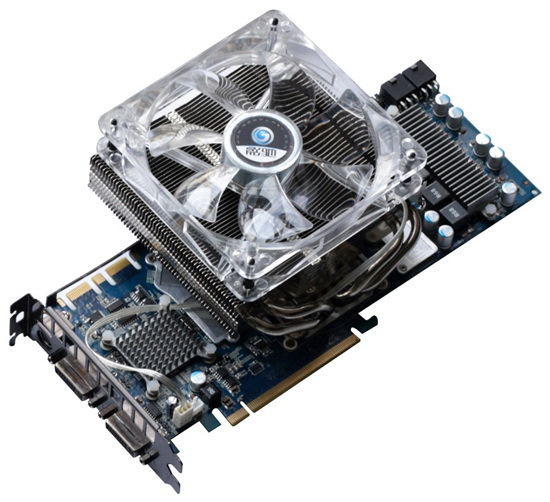 Here you can see the rating of the video card by users, as well as put your own rating. 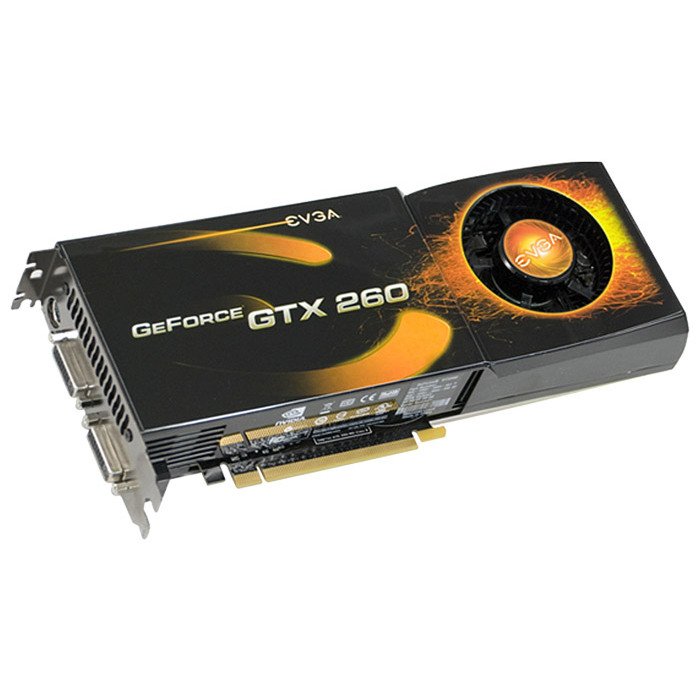 Here you can ask a question about the GeForce GTX 260 Core 216, agree or disagree with our judgements, or report an error or mismatch. 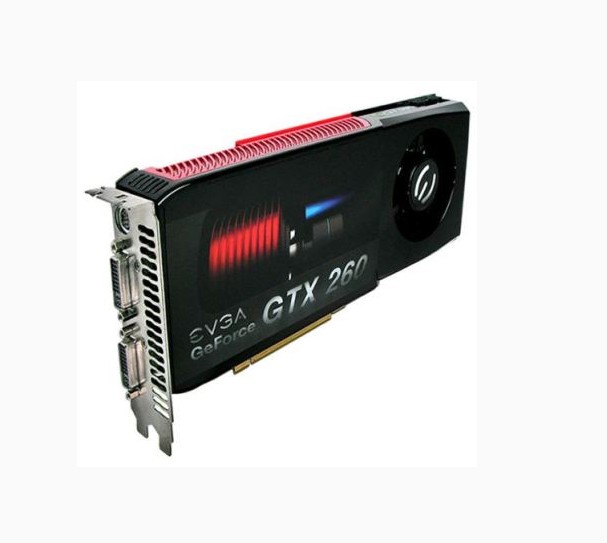 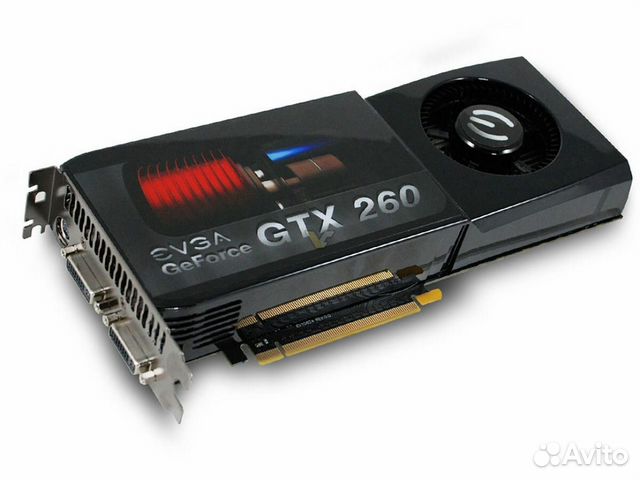 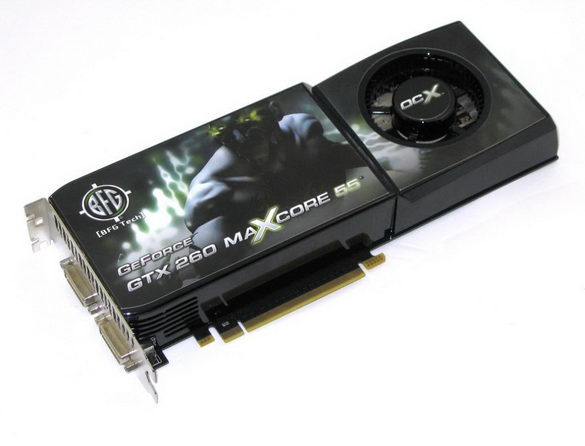 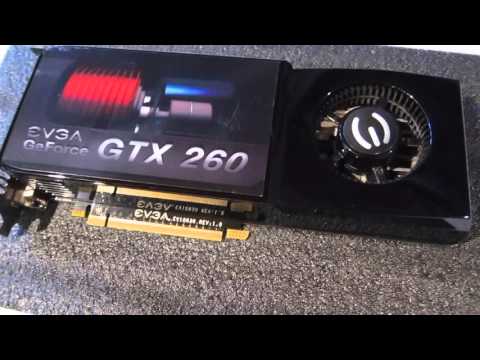